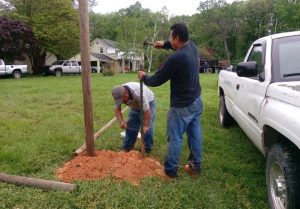 9 am! Savy and Hermas, of Doug Fabbioli’s crew, already have their boots half way into the mud. It has been raining heavily for the past few days, so there are puddles everywhere. Even if the grey sky looks threatening, there was no way we were going to report the deer fence project, scheduled for the 4th of May 2019, at Robert Brose’s place. Everybody was working hard to honor Melanie Brose’s memory and make her dream come true.

Melanie always wanted to have a deer fence built, but before she could make it happen, she lost her life in a tragic accident this past winter on her farm.  The New Ag School, the Lucketts Ruritan Club and the Brose family put in a collective effort to put up the fence she always wanted.

Months after her death, her husband Robert Brose reached out to Doug Fabbioli, the founder and director of the New Ag School to help him with the deer fence project. As soon as Doug Fabbioli heard about the project, he did not think twice.

“When I received the note from Robert and connected the dots of his land and his wife, there was no question that I had to get involved. Land Stewardship and farming was a passion of Melanie and Robert Brose. They purchased the farmette at the top of the hill on Stumptown Road for the views, the space available, the grape growing possibilities and because it was in the heart of the burgeoning wine industry. Tragically, Melanie lost her life on her farm this past winter when an ice-covered branch broke off a tree and landed on her. We had to act. And quickly, as the deer were eating everything Robert had on his farm. I also brought the Lucketts Ruritan Club on board for support and I think that teaming up with the Ruritans adds the element of community fellowship and service”, explains Doug Fabbioli, who is managing the project. 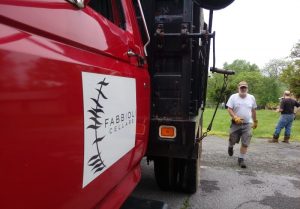 This is how the New Ag School, the Lucketts Ruritan Club and the Brose Family put together the deer fencing project “Build a Fence, Build a Dream: Lend Your Muscles for a cause” on May 4th 2019.  Doug Fabbioli brought his team and equipment; Robert Brose provided the material and other things needed and the Lucketts Ruritan Club will be financing a Fencing Module that will be developed and designed by the New Ag School: “We have been digging holes and setting posts for a deer fence around the garden, fruit trees and future vineyard. We also sent out a call for volunteers to help us with this project and we had some people showing up”.

For his part the President of the Lucketts Ruritan Club, Peter Gustafson says that when Doug Fabbioli told him about the project, he could only say yes and guarantee the Ruritans support.

“We wanted to help with the project and honor Melanie’s memory the best we could. For forty years now, the Lucketts Ruritan Club has been following the National Ruritan organization’s motto of Fellowship, Goodwill and Community Service in and around Lucketts.  It is in that spirit that the Club has partnered with the New Ag School in the Robert Brose Project.  It is the Club’s goal that coming to the aid of a community member might prove to be meaningful gesture to Mr. Brose as well as benefitting the New Ag School. The New Ag School will use this project as a base upon which to build an educational module. This tool will be used to teach fence and trellis design and installation. The cost of developing this module would be funded by the Lucketts Ruritan Club”, highlights Peter Gustafson. 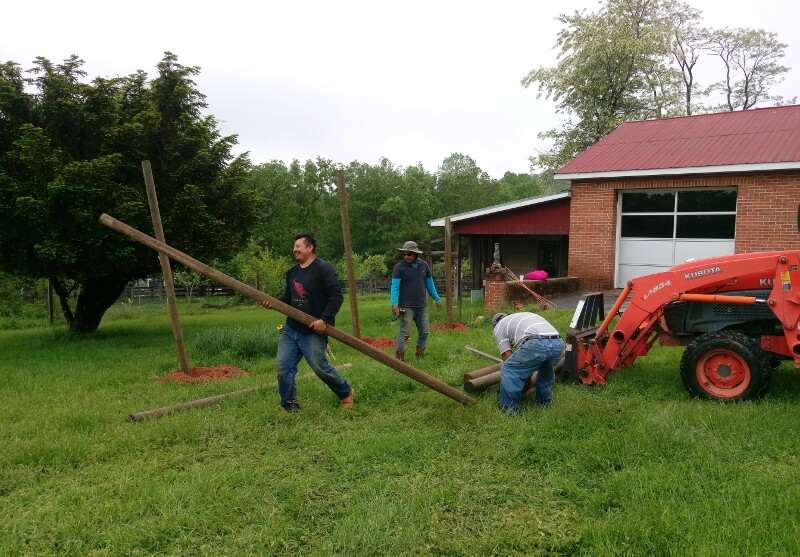 It was a very emotional Robert Brose that we met the day the poles were being put into the ground by Doug Fabbioli’s crew, helped by the Brose family and volunteers. He thanked everybody for their commitment to this project that meant a lot to him.

“Melanie spent a great deal of time evaluating and improving the land at our small farm property here in northern Virginia.  Before deciding on what type of things to plant, she surveyed the plants, animals, and microclimates already present.  Melanie discovered gnarled peach trees and blackberry surviving in an overgrown garden, wild persimmon and pawpaw trees along the woods, and noted the cool mountain breezes that descended from the hills above in spring and fall.  She cataloged many birds, possum, box turtle, and salamanders in the yard, recorded changes in climate and soil, and used this understanding of the native habitat to understand the region and her options”, shares Robert Brose. 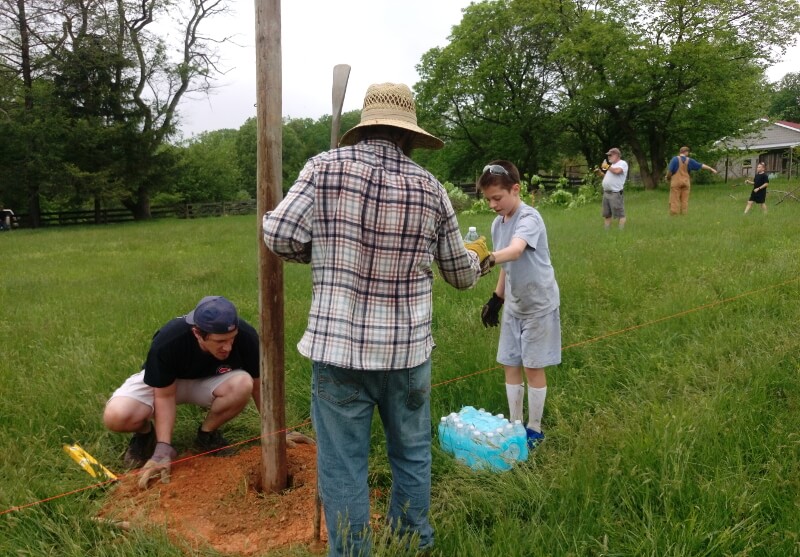 He continues that Melanie was growing to produce for both local markets and charities. She selected and grew apple, peach, plum, persimmon, gooseberry, and blueberries, and filled the garden with tomatoes, cardoons, kale, okra, squash and melon, as well as elderberries and native pollinator plants obtained at official plant rescues in Fairfax county, where development was displacing native habitats and heirloom gardens.  Melanie obtained Audubon habitat certification for wild areas of the property that were maintained for small creatures like goldfinches and turtles, and planned to establish an area of red wine grapes, in addition to bringing in additional persimmon and other rare fruits like cornelian cherry.

Unfortunately, overpopulation of deer in the area, due to loss of predators and human provision of food for them, led to severe damage to her plantings – both perennial and annual – and production losses were extremely high in 2018.  Not only were fruits and vegetables lost, the deer actually destroyed established trees and plants, despite the 6 foot fencing, barbed wire, anti-deer scents, and our venturing outside as frequently as three times a night to displace deer during the summer of 2018.

“While we have participated in state approved culling plans, protecting the fruit trees, berries, and gardens that Melanie spent years putting in for her vision of beauty and productivity requires a 24hr/365 day a year means to exclude deer. The support from The New Ag School and the Lucketts Ruritans Club has been tremendous.  They immediately understood the challenges we faced, and the vision Melanie had of discovering and bringing forth the full potential of the land and sky here in western Loudoun.  While she was alive, protecting the land was a great priority for Melanie, and assistance completing the fencing she hoped to establish will preserve the plant and animal life, improvements, and vision she had for future, allowing generations in the future to enjoy the benefits of her efforts. And I want to thank everybody who came to help. This is what Melanie has always wanted and I am sure that where she is, she is as much grateful as me to all of you”. 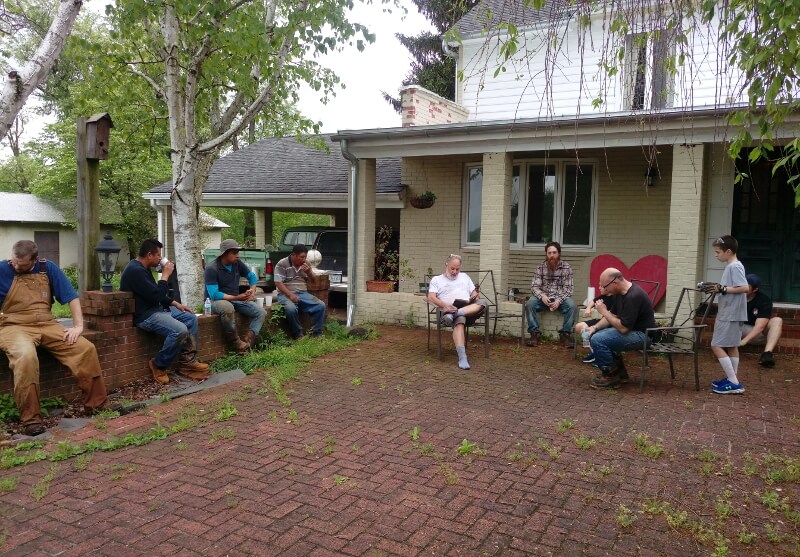 A Note from Doug

Saturday on The Farm
Scroll to top